The Hindu Senior Secondary School, Indira Nagar, Adyar, Chennai -20 has declared itself as a FIT INDIA School, and has been issued this certificate in recognition of the online self declaration done by the school. Can now use the FIT INDIA Flag and Logo. The school is expected to honour the declaration given during the registration process. 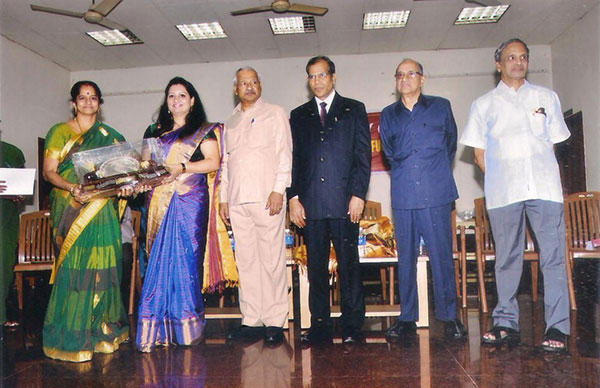 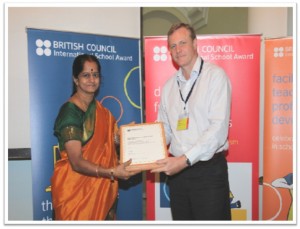 The school students have a long ‘Success Tradition’ in academic as well as co-curricular activities and the school with every passing academic year carries forward a legacy of hard work, all-round participation and development of the students. Having won laurels and achieved recognition at both global and national levels, the institute and the students have been in the limelight throughout.

The same year, Portsmouth Central Library and The University of Portsmouth in the UK, collaborated on a project to enhance use of Visual Libraries. British Council joined hands to take the initiative further in India. Chennai was the first city chosen to pilot this project and our school went on to become an important segment of this initiative. In this regard, we had Dr. Maureen O’Neill, Senior Lecturer, School of Art, Design and Media, Portsmouth and Claire Sambrook, Senior Lecturer, University of Portsmouth visiting our school on 19th of August, 2010.

Furthermore, The Hindu Senior Secondary School and Copenhagen Open High School, Denmark have developed a global partnership and have agreed to work on the project “Effects of Climate Change” as part of The Pilot Project. The Pilot Project is a project set up by a network of Danish High Schools and a number of schools from various parts of the world including India, Kenya, Egypt and Tanzania. Our teacher, Mrs. Thilothama Ravi visited Denmark for a week, representing our school in the same. She participated in the co- teaching programme, aimed at motivating students to participate in different educational activities and learn more on the cultural differences and global issues of the world. 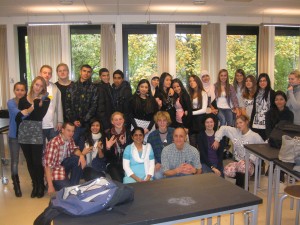 Our school has recently established a partnership with Stanton under Bardon Community Primary School, England through the British Council. This Global School Partnership is directed with the objective to bring about global education through joint activities so that the children are sensitive to global issues, are able to critically analyse and develop mutual respect for the whole mankind. The primary section of our school is working in coordination with the students of Stanton under Bardon Community Primary School. The curriculum project chosen is ‘Go Green’. This partnership has helped and will continue to help the students of our school as well as the partner school to work together, which in turn would be a significant step in solving global problems, and also provide an opportunity to learn more about them and the world around them

As the initial part of the exchange program, Mr. Daniel Shirley of the U.K school was in our school in the month of April, giving an opportunity to exchange ideas, skills and knowledge on the chosen themes. An appreciation of our environment and its living things, valuing resources, willingness to take care of the environment, and taking responsibility for a greener earth and spreading the message of a ‘Cleaner And Greener Earth’ marked the beginning of this exchange program. Mr. Daniel has carried back with him the essence of the visit along with some displays made by our students to be shared with the students of his school. This will mark the beginning an exchange of ideas on various topics in the days to come.
As part of the reciprocal visit, Mrs. Chandra Chandrashekharan visited the UK school in November, 2011.The children at Stanton were made aware of Indian customs and culture. Over the coming months, the students of both the schools would continue to work with greater enthusiasm and interaction via tools like Skype etc..

THE FOLLOWING IS HIS VIEW:
“The ten days I spent at the Global Young Leaders Conference were without a doubt the most enjoyable days ever. 7 days at Washington DC, and 3 days in NewYork, GYLC has brought about a significant change in me, and I am sure it did for the 400 other students who came in from different parts of the world. The interaction that I had with people belonging to diverse cultures has not only enlightened me about different cultures, but also made me realise how important my own culture is. I was presented with this golden opportunity to attend the GYLC by my school and I must thank them from the bottom of my heart to have given me such a wonderful opportunity.”

Mrs. Padmini Sriraman-Best Teacher Award for the year 2011 Dignitaries with honoured staff for their 25 years of service 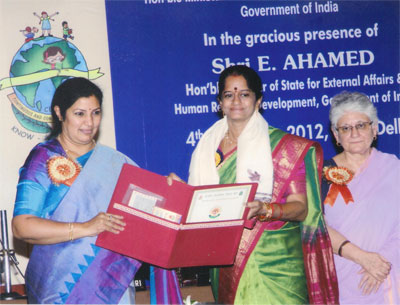 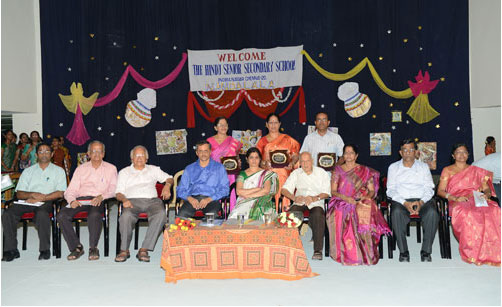 Class XII – One among the Top 20 Times scholars – She received a certificate, cash award of Rs.5 lakh and a medal from Shashi Tharoor ( Minister of state for Human Resource Development, Delhi )